Over 260 songs dated from 1920 to 2011, with composers ranging from Peter Allen to Maury Yeston. This resource book is designed to help anyone who wants to find appropriate music theatre solos for younger performers. It does not pretend to be comprehensive; I admit to reflecting my own preferences and interests in this selections, while listing from several readily-available anthologies as well.

I feel passionately about the rich, lively and diverse range of material available to artists from the field of music theatre,. It spans all imaginable musical styles within the standard Western traditions – and a few more besides! There are music theatre songs that demand a solid classical technique and styling, there are great jazz songs, rock-and-roll songs, pop songs, country-and-western songs, Gospel songs… and all from musicals.

With younger singers, teachers tend to be concerned about the vocal and emotional appropriateness of material for their students. It is for these reasons that I have collected this range of songs, most of which I have enjoyed worked on with students over the last 25 years or so.

Here’s the range of information that is presented about each song title:

1. The voice type for which it was originally written (although some songs are written for a ‘child’ in the show or film from which they come, the character is played by an adult; this information is very useful when assessing the suitability of a song to a developing voice)

2. The style of the music (up-tempo, ballad, waltz, character, comic…)

3. The name of the character who sang it in the show

4. The name of the show or film from which it comes

5. The name of the composer/s

6. The date when the song was composed.

If the song is printed in any of the widely-available song collections anthologised for this book, symbols indicate in which book/s the song appears.

A few facts:
•Over 200 separate song titles listed
• Songs from stage and film musicals
• Songs suitable for singers aged from tiny-tots to ‘teens’
• Because there are many different occasions for which we need to find appropriate repertoire, all the songs are indexed in four separate lists –
Alphabetical, by Title
Alphabetical, by Composer
Chronological (date of composition)
Alphabetical by Voice Type (i.e., the voice type for which the song was originally written)
• Includes a bibliography of research and reference books 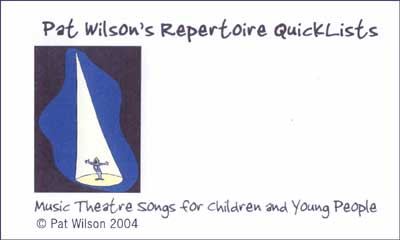