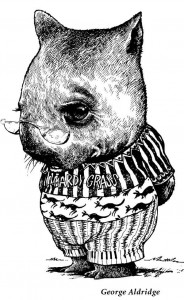 Whenever I perform, there will be a wombat perched somewhere on the piano near me. Many people have asked me why. Here’s the story.

In the early ‘eighties, when I lived in Adelaide, I was preparing to perform for the first time on television. It was going to be a Telethon, a peculiar amusement beloved of those times, where TV stations gave over a 24-hour period for entertainments focussed towards charity fund-raising. The atmosphere was always unremittingly jolly, and a broad range of performers, from high-profile celebrities to wannabes, were asked to contribute by coming into the studio and doing their party pieces live-to-air. And Channel Ten had asked me! I was writing and performing original satirical songs at the time, and was about to do a solo show of them [Pat Wilson: Words and Music] in the forthcoming Adelaide Festival of Arts… in the Fringe, of course. And I was on the show on Saturday night.

Like all civilised Adelaide folk, I shopped every Saturday morning at the Adelaide Central Market. It’s a fine institution where fresh fruit and vegetables, esoteric cheeses (I remember having Limousin explained to me by a patient Italian stall-holder), and a wealth of baked goods appeared side-by-side with knick-knacks and souvenirs. As I shopped that Saturday morning, I kept thinking about what had been worrying me all week: in planning for TV, I wished that I could add a more visual element to my work, but I was stumped. How could a plump woman with a bright red afro sitting at a piano, playing and singing, be more visually engaging? The top I was going to wear was vivid. (On sober recollection, it was probably a bit worse than that, but I thought it would do the job.) I’d thought of painting my nails a fluorescent shade of scarlet, but knew it would be of limited impact. I was stuck at the piano, unable to dance around or wave my arms… how static, when television is all about image.

As I thought of this, I walked past a souvenir stall. I passed it every week, but until then had never taken notice of it. I saw a couple of stuffed wombats with a cheap ribbon around their necks. I decided to buy a wombat and put it on the grand piano with me. I had no history of interest in these beasts, but I recall thinking that it would at least give the cameraman something else to use while I performed. Once I’d bought the wombat, I took the ribbon off its neck, went to a nearby cheap-jewellery stall and bought a gold necklace for it. I went off to the studio gig that night accompanied by my furry pal.

Afterwards, when I looked at a video of my performance, I saw that the cameraman had indeed used the toy wombat continually throughout the set. He zoomed in on its little whiskery face, pulled out to a wider shot of beast-plus-me, and so on. It was then that I thought, “You have served me well. You may stay.” Shortly after this, Kym Lardner, friend and fine graphic artist, designed a logo and business card for me, and a perky wombat appeared upon it. It just seemed right.

To this day, wombats live on my piano. Wombat is my totem. 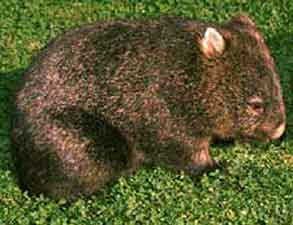 You will be delighted to know that live wombats never come near my piano. Why not? Check out some of these facts and you’ll soon get the idea.

• They are native to Australia

The Northern Hairy-nosed Wombat is critically endangered, being found in only one place in Australia – Epping State Forest in Queensland

• Both male and female wombats are solidly built with squat, round, bear-like bodies, a large strong skull and a short stumpy tail

• Wombats have small eyes and ears, but a very large, prominent nose

• Some wombat species have hairless noses; others’ noses are covered in hair

• The hind paws of the wombat contain four claws with the fifth toe looking like a small, clawless thumb

• Wombat fur is coarse, with an even colour ranging from black, dark grey, silver grey, chocolate brown, grey-brown to cream

• It is the faunal emblem of South Australia

• Wombats pose great danger for motorists at night; a barrel of muscle with a low centre of gravity, they can act as a launching-ramp that sends the car skywards and off the road

• Wombats like depositing their poo on rocks, tree stumps and anything that will help them define their territory

• During the Sydney Olympics in 2000, the wildly popular unofficial mascot for Australia was Fatso the Fat-Arsed Wombat (a.k.a. The Battler’s Prince); this mortified Olympic officials whose sanitised versions of cute koalas, platypuses and echidnas were not as readily accepted by the larrikin spirit of Australia 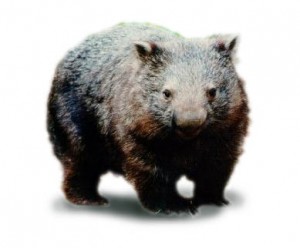 “The creature that kills the most people each year is the common Wombat. It is nearly as ridiculous as its name, and spends its life digging holes in the ground, in which it hides. During the night it comes out to eat worms and grubs.

First, the animal is indestructible. Digging holes in the hard Australian clay builds muscles that outclass Olympic weightlifters. At night, they often wander the roads. Semi-trailers (Road Trains) have hit them at high speed, with all 9 wheels on one side, and this merely makes them very annoyed. The express this by snorting, glaring, and walking away. Alas, to smaller cars, the wombat becomes an asymmetrical launching pad, with results that can be imagined, but not adequately described.

The second way the wombat kills people relates to its burrowing behaviour. If a person happens to put their hand down a Wombat hole, the Wombat will feel the disturbance and think “Ho! My hole is collapsing!” at which it will brace its muscled legs and push up against the roof of its burrow with incredible force, to prevent its collapse. Any unfortunate hand will be crushed, and attempts to withdraw will cause the Wombat to simply bear down harder. The unfortunate will then bleed to death through their crushed hand as the wombat prevents him from seeking assistance. This is considered the third most embarrassing known way to die, and Australians don’t talk about it much.”

From an article entitled “The Confusing Country” by Jeremy Lee.

[NOTE: This article was originally attributed to Douglas Adams (of Hitch Hiker’s Guide to the Galaxy fame) but has since been found to have been submitted to the H2G2 website by Jeremy Lee in 1999.]

you may read the phrase “My wombat has constipation” in thirty-four languages. Don’t ask.

From The New Hacker’s Dictionary

“WOMBAT: [Waste Of Money, Brains, And Time] adj. Applied to problems which are both profoundly uninteresting in themselves and unlikely to benefit anyone interesting even if solved. Often used in fanciful constructions such as “wrestling with a wombat”. See also “crawling horror”.

The wombat lives across the seas,

Among the far Antipodes.

He may exist on nuts and berries,

Or then again, on missionaries;

Conclusive knowledge of his moods,

But I would not engage the wombat

In any form of mortal combat.